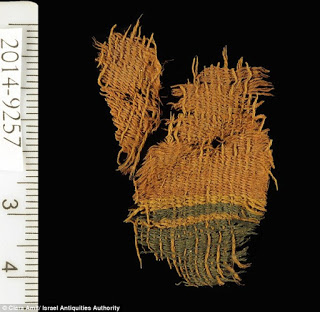 Timna was a copper-rich region associated with the Horites and protected by Egyptians, Edomites, and Midianites. It held a shrine dedicated to Hathor the mother of Horus, and a copper serpent was found there (p. 109). The copper serpent was the totem of the Horite metal workers. 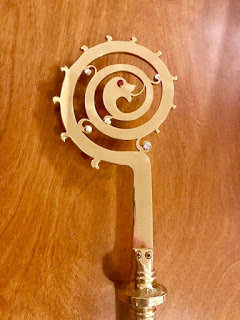 The way the serpent coiled around the staff of Moses reflected the sun's radiance, symbolic of purity. The sun was the emblem of God among the Horite Hebrew. The coiled solar serpent on the staff indicated that Moses was God's appointed leader of the people. Even today, this image appears on the croziers of some bishops in the Church.

The association of copper with serpent is evident is the relationship between the Akkadian words: sibbu - serpent and siparru - copper. The words Hittite and Het share the same primitive root HT. HT is the Hebrew and Arabic root for copper - nahas-het. As an adjective, HT means shining bright, like burnished copper. Nahash (NS) refers to a serpent. The HT copper smiths apparently ranged from Timna to Anatolia in Turkey. The serpent image was sacred for them, just as it was for Moses the Horite Hebrew ruler who fashioned a bronze serpent and set it on the standard (Numbers 21:9).

The mines at Timna are at least 6,000 years old and there are newer ones as well, totaling about 10,000 shafts. The oldest mines were worked almost continuously until the Roman Period. There are ancient rock carvings showing warriors in chariots, holding axes and shields. A temple dedicated to Hathor was discovered at the southwestern edge of Mt. Timna by Professor Beno Rothenberg of Hebrew University.


The Chalcolithic metal works at Timna were found at the Wadi Nehushtan in the foothills along the western fringe of the southern Arabah Valley. The smelting works, slag, and flints at this site were found to be identical to those discovered near Beersheba where Abraham spent much of his time. The metal workers of Timna and the metal workers of Beersheba were kin, and the patroness of their mining and smelting operations was the mother of Horus who was venerated or worshiped by the Horites. In other words, these were Horite metal workers. In his book Timna, Rothenberg concluded that the peoples living in the area were "partners not only in the work but in the worship of Hathor." (Timna, p. 183)
During the early Iron Age, a tent-sanctuary appeared at the Hathor shrine. However, according to Nissim Amzallag, "the metallurgical character of this shrine was maintained."