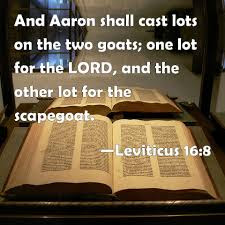 Cleromancy refers to various methods of sorting for the purpose of making a decision. It has been used (and is still used) to eliminate potential marriage partners, to decide about business deals, and to establish the most propitious day for weddings and festivals that are not fixed.
The idea that a message might be received from God on a matter of human concern is very ancient. In early Egypt a person might sleep in the temple in the hope of receiving a message from the resident god. This is called incubation.
The casting of lots, the reading of the entrails of animals, cleromancy using astragali, and the use of occult objects were common practices in the ancient world. Casting lots was used by the sailors to determine that Jonah’s disobedience was somehow responsible for the perilous storm. The disciples determined who was to replace Judas by casting lots (Acts 1:21-26). In Luke 1:9, the priest Zacharias is selected by lot to burn incense at the veil of the temple. The high priest was selected by lots at the time of David (1 Chron. 24:31). Lots were cast to determine assignments of the Hebrew clans. We don’t understand how this worked, but it was a widespread decision-making method in the ancient Near East.
Genesis 12:6 suggests that Abraham consulted a seer when he came to Shechem. The seer is called a "moreh" and, as was often the case with those who gave advise, he sat under tree (Deborah sat under a tamar between Ramah and Bethel, Judges 4:5). The moreh's tree was an oak between Ai and Bethel. The term "moreh" refers to one who throws from the hand. Did the moreh cast lots or employ a method similar to the Urim and Thummin?
The High Priest’s use of the Urim and the Thummin is not a good example of cleromancy. The practice was directed by God in Exodus 28:30: “Also put the Urim and the Thummin in the breastpiece, so they may be over Aaron’s heart whenever he enters the presence of the Lord. Thus Aaron will always bear the means of making decisions for the Israelites over his heart before the Lord.”
It appears that the Urim and Thummin were used to determine a yes-no answer to specific inquiries made by the High Priest. They represented a binary set, and each entity of the set had layers of associations. The priest was trained to recognize the greater over the lesser. We note many examples of binary thinking in the Old Testament: The Creator is greater than the creature; the Sun is greater than the Moon; males are larger and stronger than females, life is better than death, etc. Guidance involved pursuing the greater as it is reflected in the order of creation. (Romans 1:20 - "For since the creation of the world God’s invisible qualities—his eternal power and divine nature—have been clearly seen, being understood from what has been made, so that people are without excuse.")
In dualism, the entities of the binary set are regarded as equal (Yin Yang). Yin Yang seeks to find balance and avoid extremes in decisions and implementation. However, in the ancient Hebrew way of thinking, one entity of the binary set is recognized as superior in some evident way to the other entity, and this guided decision making.
Jacques Derrida, the French-speaking Jew from North Africa, speaks of dominant and subordinate voices in literary texts. He explores the interplay of these voices. The Structuralist anthropologist Claude Levi-Strauss observed the binary logic of primitive tribes that he studied (The Raw and The Cooked). The Deconstructionist philosopher Derrida could not escape the binary reality either. Levi-Strauss based his conclusions on empirical observation of humans; Derrida on analysis of human language.