The Faith of the Early Hebrew Delivered to Us

This green malachite stone, a gift from the Egyptian king with whom the Hittites signed a treaty in 1258 BC, was at the center of a shrine in the Hittite capital of Hattusa (in Çorum Province in Turkey). Green malachite represented new life and the hope of resurrection among the Horite Hebrew devotees of God Father and God Son. The land of the blessed dead was described as the "field of malachite."
Green stones were associated with Horus or HR in ancient Egyptian, meaning Most High One. The Book of the Dead speaks of how the deceased will become a falcon "whose wings are of green stone" (chapter 77). The Eye of Horus amulet was made of green stone. The Pyramid Texts (ca. 2400 BC) speak of Horus as the "Lord of the green stone" (Utterance 301). 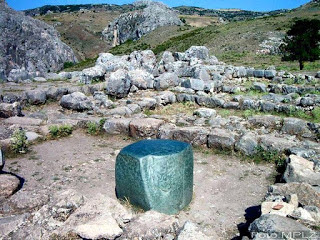 The oldest known site of Horite Hebrew worship is Nekhen on the Nile (4000 BC). It was at a high elevation (mound) to protect it from the annual floods. The Horite Hebrew were very familiar with floods.

All these men are members of the same Horite Hebrew ruler-priest caste, as has been demonstrated by analysis of their distinctive kinship pattern. That's science!

This suggests that all the narratives in Genesis 1-12 come from the same people group, and that these details are part of a received tradition extending back at least 6000 years.
After 40 years of methodical research, God-dropped hints, the right people crossing my path at the right moment, countless pages of reading and note taking, 13 years of blogging, public speaking, etc... I have scratched the surface of what the Bible has to tell us about Jesus Messiah, the Son of God, whose expectant ancestors were justified because they believed in Him before the Incarnation. His identity was confirmed by His resurrection which they had hoped to see.