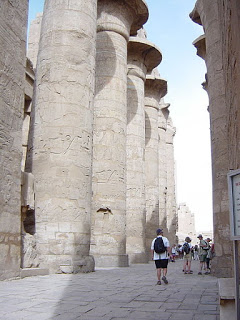 In the ancient Egyptian and Ugaritic languages the word "piru" meant house, shrine or temple. The O'piru were Sun temples located at the center of royal Sun Cities. The Sun was the emblem of the Creator among the servants of the Sun temples, and the servants of the temples are known in acient texts by various names: ha'piru, 'apiru, or ha'biru. In ancient Akkadian, the language of Nimrod's territory, the priest was called "Abru" and the Hebrew priest caste was called "Abrutu".

There were various castes of people who worked at the east-facing O'piru. These included priests, metalworkers, leather workers or tanners (ta-hash), stone masons, vintners and warriors. By the second millenium B.C. the ha'piru were dispersed throughout the Nile Valley, the ancient Near East, along the Indus River Valley, and in parts of southern Europe along the major water systems. These occupations were in service to the deity and to the king who built the temple. The king often served as the high priest of the temple also. A seated statue that shows Ramses II in the leopard skin of a priest was found at the temple that he build near Cairo. The temple was found in a suburb of Cairo called Ain Shams. "Shams" is the Arabic word for Sun.

The deity to which the temple was dedicated was the deity to which the various priests were devoted. Most priests recognized a High God, though the High God was called by different names: El, Re (meaning "Father" in ancient Egyptian), Shamash (related to the word for Sun, the emblem of the High God), YHWH, Ani, etc.
In Genesis 14:13, Abraham is called "Hebrew" and the geneological data of Genesis 4- 11 indicates that his ancestors were Nilotes. Among the Nilotes there were priests dedicated to the High God and his son Horus. They are called Horite Hebrew and a great deal is known about them from ancient texts. They maintainted shrines (mounds) along the Nile and they believed in bodily resurrection.
Abraham would have been a devotee of Horus. His territory was in ancient Edom, the land of the Horite Hebrew who are mentioned in Genesis 36. Abraham's territory was entirely in the region of Edom (Idumea). He controlled the expanse on a north-south axis between Hebron to Beersheba. Sarah, his half-sister wife, lived in Hebron at the northern boundary of Edom. Keturah, his cousin bride, resided in Beersheba. (See Horite Hebrew Rulers With Two Wives.)

The Hebrew devotees of Horus were a very ancient ruler-priest caste. They can be traced back to at least 5000 B.C. to Abraham's Nilo-Saharan ancestors who were cattle herders. This was a very prestigious caste of priests in the service of kings. They dispersed widely in service of the early kingdom builders like Nimrod. One of their early shrines was a Nekhen on the Nile. The temple there is dedicated to Horus.

Another Horite shrine was Heliopolis. The Harris papyrus speaks of 'apriu of Re at Heliopolis, the shrine of the Sun. Joseph married into this royal priest line when he married Asenath, the daughter of the priest of On. On is Heliopolis, known to the residents as Iunu, meaning place of pillars.

The Horite priests of Heliopolis were known for their meticulous devotion to the Creator and his son, and for their sobriety and purity of life. Plutarch wrote that the “priests of the Sun at Heliopolis never carry wine into their temples, for they regard it as indecent for those who are devoted to the service of any god to indulge in the drinking of wine whilst they are under the immediate inspection of their Lord and King. The priests of the other deities are not so scrupulous in this respect, for they use it, though sparingly.”
The Horite Hebrew believed in God Father and God Son. The son was called Horus in Greek. In ancient Egyptian, he was called HR, which means "Most High One." (See The Substance of Abraham's Faith, and The Ra-Horus-Hathor Narrative.) 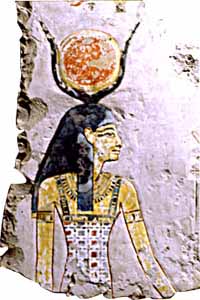 Hathor, the mother of Horus, conceived when she was "overshadowed" by the Sun, the emblem of the High God. This very ancient narrative is part of the proto-Gospel, the fore-telling of the story of the Virgin Mary who conceived by divine overshadowing, as the Angel Gabriel explained.

The angel answered, “The Holy Spirit will come on you, and the power of the Most High will overshadow you. So the holy one to be born will be called the Son of God."
Related reading: The Social Structure of the Biblical Hebrew; The Marriage and Ascendancy Pattern of the Horite Hebrew; Moses' Horite Family; Samuel's Horite Hebrew Family; The Horite High Places; The Royal Descendants of Adam and Enoch; Horite Mounds; Job, The Horite Hebrew; Horite Hebrew Territory