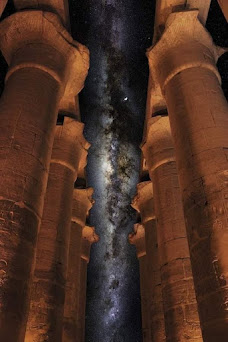 Hypostyle Hall of Karnak aligned to the Milky Way

Joseph married Asenath, the daughter of a priest of On (Gen. 41) On is known in ancient records as iunu, meaning "place of pillars". This refers to a royal temple complex, such as Karnak (shown above).

On was known to the Greeks as Heliopolis, that is, "Sun City." Plutarch noted that the “priests of the Sun at Heliopolis never carry wine into their temples, for they regard it as indecent for those who are devoted to the service of any god to indulge in the drinking of wine whilst they are under the immediate inspection of their Lord and King. The priests of the other deities are not so scrupulous in this respect, for they use it, though sparingly.”

The Harris papyrus speaks of 'Apriu of Re at Heliopolis. The terms 'Apiru, Hapiru, Habiru, Abrutu refers to a ruler-priest caste that was widely dispersed in the service of kings and kingdom builders like Nimrod, the Kushite (Gen. 10). Joseph married into this royal priest line when he married Asenath, and she was probably a relative.

Asenath's father was Putiphar or Potiphera. This title is composed of the words pu and tifra. Putifra in ancient Egyptian means "this order" and likely pertains to the order of Horite Hebrew priests, devotees of Horus and his father Re. Horus was the patron of kings. The stela of Putiphar speaks of Putiphar as the "son of Horus, may He live forever."

Horus (from the Greek) is HR in ancient Egyptian. HR means "Most High One" and can refer to God Father (Re = father in ancient Egyptian) and God Son. The image of Horus in the "holy of holies" is the Nilotic equivalent of the Mesopotamian image of Enki in the Abzu . Enki means "Lord Over All." Enki's father is Anu. That Enki is the son of God (and patron of kings) is evident from Sumero-Akkadian texts such as this: "Enki, the king of the Abzu, justly praises himself in his majesty: 'My father, the king of heaven and earth, made me famous in heaven and earth." (See "Enki and the world order: Translation", lines 61-80.)
Iunu is related to the ancient Egyptian word Anu, a name for father of Enki. Anu  means HE in ancient Egyptian and is a reference to the High God. This tile found by Flinders Petrie shows a Sethite priest of Anu. Tera-neter refers to a priest. 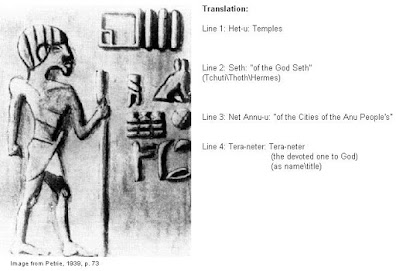 In regard to his sons, Joseph followed the marriage and ascendancy pattern of his Horite Hebrew ancestors. His wife Asenath was probably one of Joseph's cousins. Her first born son was likely Manasseh. He belonged to the Heliopolis shrine, whereas Joseph's son Ephraim belonged to the House of Jacob. This explains why Jacob gave Ephraim the primogeniture blessing (Gen. 48:14) that normally fell to the ruler's heir and first born of his half-sister wife.

Since the same marriage and ascendancy pattern of Joseph and Asenath can be traced using the biblical data back to Cain and Seth, I believe the Pharoah who Joseph served would have been a king during the Middle Kingdom (2040 to 1782 BC).
Related reading: Habiru, Hapiru, 'Apiru, Hebrew; Horite Mounds; Where Judaism and Christianity Part Ways; Abraham's Faith Lives in Christianity; Sun Cities of the Ancient World; Trinitarian Correspondences Between Mesopotamia and the Nile
Posted by Alice C. Linsley at 7:11 PM