The Genesis Record of Horite Rule


Genesis is the product of a learned priest-scribe (nabu) who had access to sources that recall a time about 1200 years before the material was probably scribed. He used the royal archives to make a connection between the origins stories of Genesis 1-4:16 and Cain and his brother Seth, the earliest known rulers among Abraham's African ancestors. Genesis 1-4 is prehistory. We meet the first historical persons in Genesis 4 which lists the rulers who descended from Cain. Genesis 5 lists the rulers descended from Seth. However, it is important to note that these royal lines intermarried exclusively, as did the lines of Ham and Shem.

The members of the Horite caste practiced endogamy, that is, they married only within their caste. Their marriage and ascendancy pattern is unique and allows anthropologists to trace the royal priest-scribe lines. Moses belonged to this caste which lends credence to the traditional view that he scribed or was responsible for the compilation of the first 5 books of the Hebrew Bible called the Pentateuch.
The marriage and ascendancy of these early rulers drove expansion out of Africa and caused new trade centers to be established. The Horite scribes kept both sacred and commercial records for the Horite rulers who controlled the major trade routes in the ancient Afro-Asiatic Dominion. When the Sahara, Arabia and Mesopotamia were wetter cargo moved along the great interconnected river systems.

The Horites have been identified with references to Khar, a unit of measurement used in trade in the Egyptian inscriptions (See James Orr, The International Standard Bible Encyclopedia, page 1421.) The word khar is related to gur. In Akkadian gurguri means metalworkers or copper smiths. In Oromo gurguru means to sell (gurgurtaa = sale, gurguraa = seller). In Somali gur- means to collect something and gurgure means one who Collects and Keeps Collecting. The Gurgure clan of the Dir refers to traders who collect wares and resale them. The Persian and Urdu word Saudagar means trader. This contains the gr root in connection with Arabia.

In Abraham's time these rulers attracted the attention of Chedorlaomer, King of Elam who attacked the Horites of Mount Seir (Gen. 14; Gen. 36).

Moses' family was a priest-scribe family in Egypt and it was through the Horite families that the material was preserved. How do we know that Moses was a Horite? His father, Amram, married a descendant of Seir the Horite. Ishar was Amram's patrilineal cousin or niece. This means that Ishar and Amram had a common Horite ancestor, probably Seir. 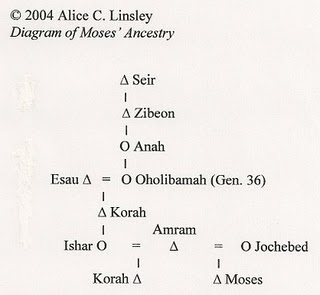 Assuming that Amram followed the marriage pattern of his Horite ruler-priest ancestors, Moses' mother was Amram's half-sister.  They had the same father, but different mothers (as did Abraham and Sarah). As blood line was traced through the mothers and the priestly lines intermarried exclusively, it is highly probable that Moses, Aaron and Miriam were of Horite blood.


The Possibility of David Authorship

David was of the Horite royal priest lines also and some have argued that the first 5 books of the Hebrew Bible reflect his time rather than the time of Moses the Horite. Certainly, both are candidates by reason of their familial ties, and it is likely that both had a hand in the development of this material. The final editor is the Deuteronomist Historian who revises biblical history, creating contextual incongruities, but that is the topic of another discussion.