Among Abraham's Hebrew caste, the rulers had two wives. The first was usually a half-sister and the second was usually a patrilineal cousin. The first-born son of the first wife was the ruler's proper heir. The first-born son of the cousin wife belonged to the household of his maternal grandfather and after he came of age, he served in the territory of his maternal uncle. (See The Hebrew Hierarchy of Sons.)
The relationship between the cousin bride's first-born son and her father is illustrated by a distinctive naming practice which I refer to as "the cousin bride's naming prerogative." This prerogative pertains only to cousin wives of high-status Hebrew rulers. These were the second wives, taken prior to the ruler's assuming control over his father's territory. The diagram below illustrates the cousin bride's naming prerogative.
Lamech the Elder (Gen 4) had a daughter Naamah. She married her patrilineal cousin Methuselah (Gen. 5) and named their first-born son Laech after her father. 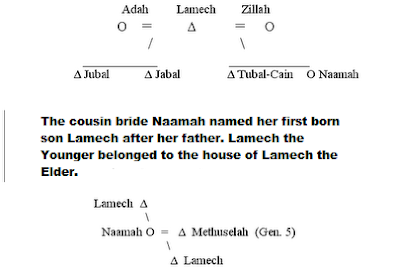 As the sister wife had the same father as her husband, there was no need to identify her firstborn with the ruling father. The first-born son of the half-sister bride was his father's proper heir.
Sarah was Abraham's half-sister bride and Isaac was Abraham's proper heir. Keturah was Abraham's patrilineal cousin bride, and her first-born son would have served as a high official in the territory of her father.
Beginning in chapter 11, Abraham becomes the focal point of Genesis. We are told that he was Hebrew, and he was very rich in cattle, silver, and gold (Gen. 13:2). His high social status is evident in the personal audiences he had with Pharoah and King Abimelech. Melchizedek, the priest-king of Jerusalem, ministered to Abraham after battle. This involved ritual cleansing from blood. The Hittites (descendants of Heth the Hebrew) recognized Abraham as a "great prince" among them. Abraham’s personal guard consisted of at least 318 warriors trained in his household.

Throughout the Bible we find examples of women naming their sons. In the case of Benjamin, Rachel's name choice of 'Ben Oni' was overruled by Jacob (Gen. 35:17-20). Mary was told to name her son Jesus. Elizabeth was told to name her son John.
Names are changed to make a statement. Jacob came to be called Israel. Abram became Abraham.
Some names indicate the person's office or title. Terah means priest. Lamech is related to the word melek, meaning king. Na'Hor and Hur are Horus names. Horus names appear among the Horite Hebrew.
Some name changes appear to disguise the ruler's ancestry, and this may be intentional in some cases.

The first-born sons of concubines were given gifts and sent away from the chief's proper heir. This is what Abraham did (Gen. 25). Often these "sent-away sons" became rulers, having established themselves in new regions. An example is Nimrod, a Kushite kingdom builder who established his kingdom in Mesopotamia (Gen. 10). Another example is Abraham. Abraham received his calling to go to Canaan after his father died in Haran and his older brother assumed control of Terah's holdings. God directed Abraham's future course as a sent-away son.
Keeping with the custom of his Hebrew ancestors, the ruler-priest Terah had two wives. One wife was the mother of Nahor and Abraham, and the second wife was the mother of Haran and Sarah. Nahor was Terah's proper heir. Haran's mother was a cousin bride as is evident by the cousin bride's naming prerogative. She named her first-born son Haran after her father, the chief of Haran, shown on this map. 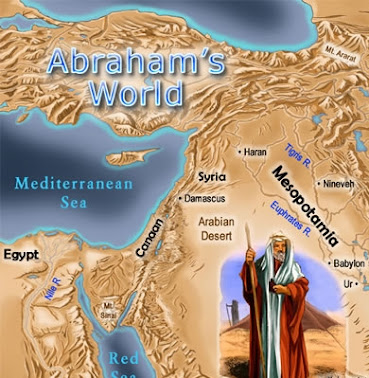 Terah's firstborn sons were Haran and Nahor. Haran died in Ur and Nahor ascended to Terah's throne and ruled over Terah's territory between Haran and Ur. This means that Nahor, not Abraham, was the firstborn son of Terah's sister wife. Abraham was led by God to relocate to another region, and Abraham went to where his mother's kin lived in Canaan. This is what Jacob did also.


Related reading: Who Were the Horite Hebrew?; The Hebrew Were a Caste; Hebrew Rulers with Two Wives; Royal Sons and Their Maternal Uncles; Abraham the Hebrew

Is there anything in your cousin bride's naming prerogative thesis that helps with daughter's names? For example, would you be able to provide any insight into understanding the significance of the name "Bathsheba," (daughter of ... ?), who appears to us in II Sam. 11:3 with the name we know most familiarly. But in I Chronicles 3:5, the second part of her name is "shua" ? Jonathan

Her name in Hebrew is בת שבע‎, Bat Sheva, which simply means daughter of Sheba. The House of Sheba is a prominent Horite clan. Sheba, along with Peleg and Joktan, was one of the 3 heads of the Horites.

The Samuel passage is closer to Genesis than I Chronicles, which represents a later period. You see this in the way I Chronicles 4:4 lists Hur (Hor or Horite) as the "father of Bethlehem". In fact, Bethlehem is a place, not a son. Yet the author of I Chronicles knew that Bethlehem was originally a Horite settlement, less than 10 miles from Mt. Hor.

The name 'Bathshua' appears to be influenced by the Greek translation of the Old Testament (the Septuagint).

The geneologies of Genesis trace only male rulers and the naming of the first-born son after the cousin bride's father was a way to trace royal lineage.

Hi, I stumbled upon this blog many years ago and return from time to time because of your compelling explanations. I find that I want to cite your explanations but all the citations are blog post which don't offer a rigorous defense of the claims. Where can I find a full discussion of this material? I love it and I sense that it goes a long way towards resolving a great deal of the ambiguity felt by my modern mind.

Thank you for your blog and your time!
Scott

Feel free to cite my research on the marriage and ascendancy pattern and the social structure of the biblical Hebrew. It is uniquely mine, therefore I don't cite other sources. I use my blogs to teach, and I attempt to make complex material accessible.

You should read the 7-part series on the "Social Structure of the Biblical Hebrew." Here is Part 6. It links to the earlier installments.

My method is explained in a 4-part series published at VirtueOnline. Here you will find the final installment in that series.

You also might want to visit the blog Biblical Anthropology. Here is an INDEX of topics published there:

For a more interactive approach, consider joining the Facebook Group The Bible and Anthropology where we discuss these things in greater detail.

Thanks for reading JUST GENESIS.