Ur and Harran are cities in Mesopotamia. Abraham's father Terah was a ruler-priest with holdings in both cities. This is why Abraham is associated with both locations. One of Terah's wives lived in Ur and the other lived in Harran. The normal arrangements for priests of Terah's Horite Hebrew caste was to maintain two wives in separate settlements on a north-south axis. The pattern is first found in Genesis 4 and 5 with Lamech. Abraham's marriages reflect this pattern also. His first wife, Sarah, resided in Hebron at the northern boundary of ancient Edom (Idumea), and this second wife, Keturah, lived in Beersheba, at the southern boundary of Edom. These settlements marked the northern and southern boundaries of Abraham's territory.

Terah died in Harran and Nahor inherited his holdings. From Harran, Abraham departed to Canaan as a sent-away son. He settled in the region of Edom where the Horite ruler-priests had long been established. Some of their kings are listed in Genesis 36. This is the clan of Seir, the Horite.

When we first meet Abraham he is living in Ur in southern Mesopotamia (Sumer). This is because he is a descendant of Nimrod, the Kushite kingdom builder. Genesis 10:8 states that Kush begat Nimrod. The ruler-priests of antiquity were known as 'apiru or ha'piru or ha'biru. The words piru and biru refer to a house of worship. They became widely dispersed in the service of the "mighty men of old" who established kingdoms from Central Africa to India. Terah and Abraham were Ha'biru, which is rendered Hebrew in English Bibles. 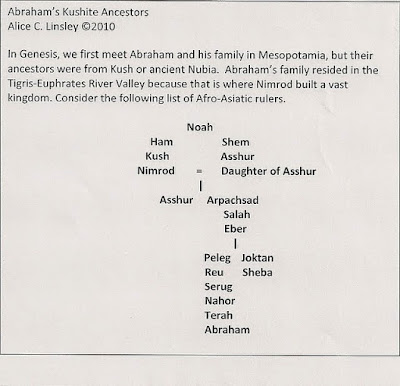 The Royal Shrine City of Ur

Some scholars speculate that the Genesis narrative is mistaken about Abraham being in Ur. Joshua J. Mark writes in the Ancient History Encyclopedia that some scholars "believe that Abraham’s home was further north in Mesopotamia in a place called Ura, near the city of Harran, and that the writers of the biblical narrative in the Book of Genesis confused the two." However, there is no reason to doubt the Genesis account. It aligns perfectly with what we know about the marriage and ascendancy pattern of the Horite Hebrew ruler-priests. Terah's territory (his priestly cure) extended between Harran in the north and Ur in the south along the Tigris river.

There were many locations called Ur or Er. This term simply designates a shrine city built at a high elevation. These were royal cities with a central temple and palace. Some shrine cities are known as Eridu and Eredo. These words are related to the Magyar word erdő, meaning forest. The earliest shrine cities were built in virgin forests. Eridu is a Sumerian place name and Eredo is a Nigerian place name.

The Ur mentioned in Genesis is in modern Iraq. It was a Sumerian settlement as early as 5000 BC, and it was continually inhabited until 450 BC. Ur's location on the Persian Gulf helped it to grow into a thriving port by 3000 BC. Due to the silting of the Tigris and Euphrates rivers, biblical Ur is now much further inland than it was in Abraham's time. The same thing happened with Nekhen, an ancient Horite shrine city on the Nile. Today the ruins of Nekhen are found far from the Nile.

In 1922, Sir Leonard Wooley excavated a burial complex in Ur and discovered royal tombs. Among the royal names found on grave artifacts was the name Mesannepadda, a First Dynasty king, also known through the Sumerian King List. As Abraham's father was a high ranking ruler-priest his ancestors are likewise remembered in the Genesis King Lists.

Mesopotamia was ruled by Sargon of Akkad between 2334-2218 BC. His territory is sometimes called "Kish" a variant of the word Kush. The script of his empire is called Akkadian. Sargon the Great claimed to have been conceived when his mother was overshadowed by the Sun while praying in the east-facing O'piru, or sun temple. Archaic rulers were believed to be appointed to rule if they could prove virginal conception by solar overshadowing. They thought of the sun as the emblem of the Creator who ruled over all the earth. Solar overshadowing indicated persons divinely appointed to rule (deified sons of God).

The Harris papyrus speaks of the 'apriu of Re at the shrine city of Heliopolis (biblical On). Joseph married Asenath, the daughter of the priest of On. In Hebrew, Joseph's name is Yosef. It has the initial Canaanite Y, a solar symbol. Many of the Horite Hebrew have the Canaanite Y in their names. In ancient images the Y is a headdress of bull horns in which the solar orb is cradled. Consider these Hebrew names: Yaqtan (Joktan); Yishmael (Ishmael); Yishbak; Yitzak (Isaac); Yacob (Jacob); Yosef (Jospeh); Yetro (Jethro); Yeshai (Jesse) and Yeshua (Joshua/Jesus). 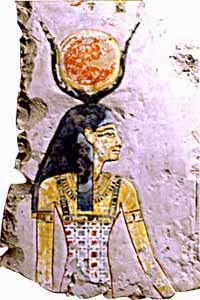 She who conceives the Son of God
is foreshadowed in images found among Abraham's Kushite ancestors.


According to legend, Sargon was born in Azu-piranu, meaning House (piru) of God (Anu). God has many names in the archaic world. One was Anu (Akkadian). Azu indicated royal house. Variant spellings include ash meaning throne in Arabic; and names like Asa in Chadic, Asha in Kushitic, and Ashai in Hebrew. In Nehemiah 11:13, we read of a Jerusalem priest named Am-ashai.

Some speculate that Sargon is biblical Nimrod, Abraham's ancestor. The terms sar and gon both refer to a king. Sargon likely means "most high king" or "king of kings." Sargon's Akkadian name was Šarru-kīnu, which is usually translated “the true king.”

Whether Nimrod is Sargon or not, the prestigious caste of ruler-priests who served in his Akkadian empire appear to have shared the notion of kingship as divine appointment by overshadowing. We find among them early expressions the Messianic expectation/hope concerning a righteous ruler who would be conceived by divine overshadowing.

Christians believe that Jesus is the fulfillment of that ancient hope. We believe Jesus is the incarnate Son of God who was conceived exactly as expected. When the Virgin Mary asked how she would conceive, seeing she "knew" no man, the angel answered, “The Holy Spirit will come on you, and the power of the Most High will overshadow you. So the holy one to be born will be called the Son of God." (Luke 2)


Related reading: Who Were the Kushites?; The Pattern of Two Wives; Edom and the Horites; Why Nekhen is Anthropologically Significant; The Urheimat of the Canaanite Y

Alice,
Do you think that the Deuteronomists which finished the Torah text were aware of all this?
You talk about the marriage of joseph and the daughter of the Heliopolis's priest, how do you think it was related with egyptian religion.
Because, frank moore talks about akhenathen revolution, which one were trying to reinstate the monotheism; so this mean that they weren't monotheist at joseph's time.
Do you know someone studing this horite caste in addition to you?

The Deuteronomist represents a much later period and a Babylonian context. This final hand on the material comes about 1500 years after Abraham and attempts to adapt the narrative of Abraham to his purpose which is to consolidate a national identity with Jerusalem as its center. Thus it urges the elimination of all other shrines and temples. The result is contextual incongruities in Genesis. See this:

So-called "Egyptian religion" has many layers, depending on the period of development. At its earliest we have the foundation set in place by the Kushite rulers who were the first to unite the Upper and Lower Nile. The Re-Horus-Hathor narrative with the red or white cow imagery likely comes from the cattle-herding Kushites. Later, the religion of Hathor's spread into other areas and by the time of the Roman Empire, it changed into goddess worship of Isis. Now we have a different narrative that focuses on fertility rather than on the conception of the Son of God. Also there is a shift to multiple deities, largely a Greco-Roman influence with river spirits, tree spirits, etc. Even then there is a recognition of a celestial hierarchy with Zeus on Mt. Olympus as the head of the pantheon.

Frank Moore Cross believes the origins of Israel's conception of God is to be found in the region of Midian in northwestern Arabia. Cross argues that archaic biblical poetry locates Yahweh's movements in Edom/Seir/Teman/Midian and that these "are our most reliable evidence for locating Sinai/Horeb, the mountain of God." Edom is Abraham's territory. It is also the territory of Seir the Horite whose clan is described in Genesis 36. See this:

None of the Old Testament people were monotheistic, from an anthropological perspective. The biblical faith is better described as henothenism: the belief in a supreme Creator served by lesser divine powers like angels or spirits. These angelic or celestial beings were often portrayed as birds in Nilotic monuments and scripts. Henotheism is much closer to monotheism than to polytheism.

I have worked on this research for 28 years. Others have written about the Horite Hebrew, but they came to different conclusions.

Robert Wolfe wrote an article titled "From Habiru to Hebrews: The Roots of Jewish Tradition". It appeared in October 2009 in the New English Review and is available to read online. Wolfe observes, "At an earlier date, identifying the Hebrews with the habiru was common, but in recent decades, the association has been discouraged, largely because habiru is now understood to be a sociological term, not indicative of any one ethnic group." This is exactly where the confusion arises.

Ha'biru does pertain to a social phenomena typical of the archaic world - the prevalence of a caste structure. To understand the Ha'biru/'Apiru/Ha'piru we must recognize two things:

1. They were a ruler-priest caste. Castes practice endogamy, that is, they marry only within and between their clans. This caste was in the service of rulers who established the earliest kingdoms on earth. That is why we find the Hebrew so widely dispersed by 8,000 BC.

2. The word Ha'piru (or Ha'biru) tell us they served in the Sun temples, the piru or biru. Ha or h' simply means "the" so that Ha'biru indicates the temple people. The later Levites are patterned on their Habiru ancestors.

Also available is the much older work by the Rev. John Campbell (Toronto, Canada) "The Horites" and this also is available to read online.